Below is a list of all charitable donations the memorial fund has made in Dan’s name.

We are beyond thrilled to announce that the Dan M. Hunter Memorial Fund has made a $10,000 donation to the Meriden Police K-9 Unit. With these funds

the Meriden PD has acquired their newest addition to the Police force! Mika is an 18 month old black lab, that will be trained as a Vapor Wake K-9. God bless Mika and her partner, Officer James DeCrisantis, as they begin this journey together to protect the City of Meriden. We know that Dan would be very proud!! 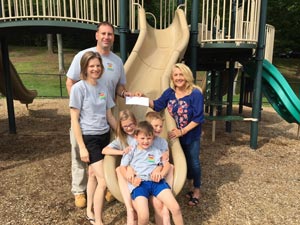 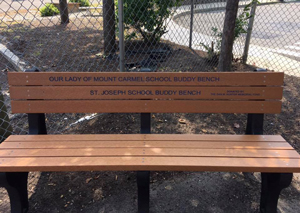 Buddy Benches promote inclusiveness and teach children to reach out to and include classmates who may feel lonely or isolated. The Dan M. Hunter Memorial Fund donated Buddy Benches to Meriden’s Benjamin Franklin Elementary School and St. Joseph School (now located at Our Lady of Mount Carmel School). Dan always kept an eye out for those in need – and these benches help ensure that no child is left out, and that kindness always matters. 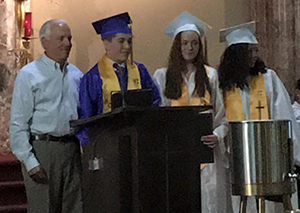 Three $500 scholarships were awarded to eighth grade students who contributed service to their school and community and who plan to attend a Catholic high school. Pictured: committee member Cliff Carlson with scholarship recipients Colin Ivers, Patricia Richardson and Sydney McIntosh. Our sincere congratulations to these three outstanding grads! 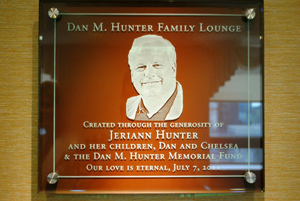 The family room outside of the C-9I unit, where Dan was cared for, was completely remodeled in memory of Dan. The new family room includes a waiting area, recliner chairs, and a computer. 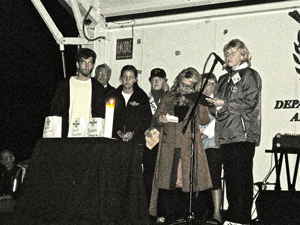 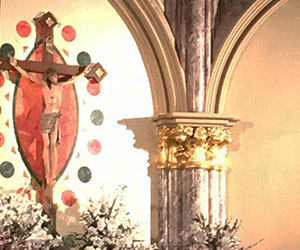 After receiving very generous donations after Dans passing, a crucifix was donated to Dans church. Dan attended St. Joseph’s school, and received all of his sacraments there, including being married and having his 2 children baptized. Due to the incredible outpouring of love, we decided to wake Dan at St. Joseph’s Church. It was a 7 hour service and we greeted over 3500 people, including many sports teams and civic groups, the staff of Hartford Hospital and even the doctor that cared for Dan. So needless to say, this donation for the crucifix was very heartfelt as well as beautiful tribute to Dans faith. The crucifix hangs above the alter in St. Joseph's Church in Meriden, CT. 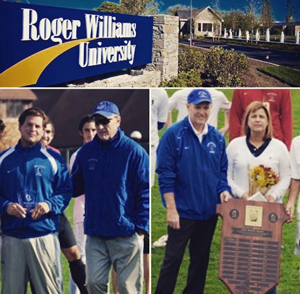 The Dan Hunter Award honors the individual or individuals whose effort and support has made a significant contribution to the RWU men's soccer team. The men’s soccer team has always had a strong following of supporters, but Dan Hunter took it to another level with arranging meals and tailgating events after every single game, home or away. This award is for any individual, whether they are friends, family members, fans or alumni that have gone above and beyond expectations in support of the men’s soccer team.

To Request a Charitable Donation: